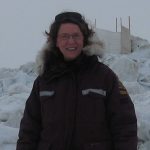 Lois has lived and worked in the north for over 30 years, holds a BSc with distinction from the University of Victoria (Marine Biology) and a M.Sc. (Zoology) from the University of Alberta (1989). Her work has focused on marine mammals and freshwater/anadromous fishes in the Beaufort Sea region, including with the private sector on Beaufort Sea oil and gas environmental impact assessments, as FJMC staff biologist 1988-1991, and 28 years as aquatic biologist with Fisheries and Oceans Canada. Working closely with Indigenous knowledge holders, she designed, co-delivered and published multiple long-term research and monitoring projects assessing trend, status, harvests, reproduction and body condition of beluga whales, ringed seals and Arctic char. She also conducted several multi-year, marine mammal aerial survey and satellite tagging programs. Lois was a recipient of the FJMC Cooperative Management Award (2000, co-recipient 2003), a Queen’s Golden Jubilee Medal (2002), was co-recipient (2010) of the US Dept. of Interior Partner in Conservation Award, is a Research Fellow of the Arctic Institute of North America (since 2004), serves on the Editorial Advisory Board for the journal Arctic, and was an Acting Canada Member on FJMC from August 2019 to January 2021. 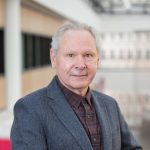 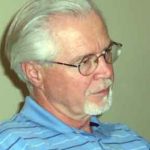 Vic has a long association with the ISR, having carried out field research on the fisheries of the area in the early-1980’s. Later as manager of the Inuvik DFO office during the early stages of the implementation of the IFA, Vic guided the establishment of the FJMC and got us pointed in the right direction. After leaving Inuvik, Vic went on to several senior positions with the Department in the Central and Arctic Region, most recently, prior to his retirement, as Regional Director General of Science. Vic was a Canada Member of the FJMC from 2007 until 2010 when he was appointed as Chair.

As a senior manager with the Department of Fisheries and Oceans and as the chief negotiator for the Department in the discussions that lead to the signing of the IFA, Gerald was an excellent choice to get the Committee started on the right path. His knowledge of the fisheries provisions of the IFA guided the development of the Committee’s operating procedures that included annual meetings in each of the ISR’s communities.

In January 1999, Nelson Green passed away while traveling on the land. As one of the principle negotiators for the Inuvialuit in their discussions with Canada, he brought a wonderful insight into the Inuvialuit Final Agreement, insight that benefited all of us as we struggled to give effect to the words of the Agreement.Nelson was one of the original IGC appointees to the Committee.

In many ways Alex shaped the FJMC. His insistence on community-based monitoring and assessment programs set the Committee on a path where the HTC’s became partners in the delivery of projects such as the Beluga Monitoring Program. He persuaded members of the importance of traditional knowledge and helped us to incorporate that wisdom into management practices. He recognized the need for training beneficiaries in the science of resource management and ensured that where possible FJMC projects contained a training component so that, in the long term, all work could be done locally. He identified the need for descriptive materials about the Inuvialuit Final Agreement and the co-management process that could be used in school programs and prodded the Committee to contribute as best it could in that area. In short, Alex served as both a catalyst and a guide for the FJMC, helping us to see old issues in a new light, and channeling our enthusiasms in productive directions, directions that were consistent with the themes of the IFA.

A fisherman, hunter, businessman and artist, Joseph picked up where Nelson left off in setting the course for the FJMC. He paid particular attention to national and international management processes including the International Whaling Commission and the Alaska-Inuvialuit Beluga Whale Committee as well as the development of community conservation plans.

As a domestic and commercial fisherman, a hunter and a businessman, Pat brought a unique perspective to the FJMC’s discussion table.  His keen sense of approaches that would and would not work in the communities as well as in the field provided a near perfect match to Dr. Papst’s enthusiasm for community-based management. Their work was instrumental in the development of the Holman and Paulatuk fishing plans.

Mr. Day was one of the Settlement Region’s most respected elders. Having spent a lifetime balancing his time between his fish camp, his whale camp, a government office and numerous boardrooms, Mr. Day brought a wealth of experience and wisdom to the meeting table.

“The land, the animals, the waters, the whales and the fish were very important to our ancestors and still are to us. Even during negotiations for our land claims settlement, our elders told us that the land and waters had looked after them for centuries and would look after us for many more if we looked after our environment.” – Billy Day, 2002 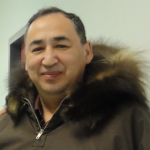 Lawrence is an Inuvialuk born in Tuktoyaktuk, NWT. He lived a traditional life with his parents Michael and Bessie, hunting and fishing by schooner during the summer months and by dog team in the winter and springtime. He moved with his parents to Sachs Harbour in the fall of 1969 and trapped Arctic fox on Banks Island and learned to hunt on the sea ice for polar bear and seal. Lawrence and Beverly married in 1981 and they have four children. Lawrence worked for the oil industry in the Beaufort Sea for five years before moving to Inuvik in 1990 to work for the Department of Transportation.

Mr. Kotokak is a business man, fisherman and hunter who has managed to combine life in the wage economy with cultural and traditional pursuits. He is married and has four children. 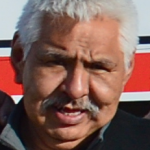 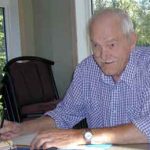 Mr. Dowler was actively involved in northern fisheries for over 45 years, and with NWT fisheries since 1961. He was a Conservation and Protection Officer in Hay River and Yellowknife and became the Senior Department of Fisheries and Oceans Manager for the NWT Area. He was the longest serving member of the FJMC. We were all saddened at his passing.

As one of the original appointees, Michelle helped set the Committee’s direction in its first few years. As a Department scientist, she played a lead role in the development of the Beaufort Sea Beluga Management Plan, a management approach that is still in use today.  Michelle resigned from the Committee when her work took her to Newfoundland. 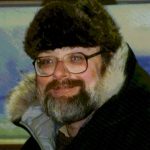 As a senior manager of science for the Central and Arctic Region’s Freshwater Institute in Winnipeg, MB, Dr. Papst brought to the table broad knowledge of the tools in the scientific tool box that might be applied to the resource management issues facing the FJMC. In addition, he was a firm believer in the role that traditional knowledge could play and encouraged members to follow a path of community-based management. 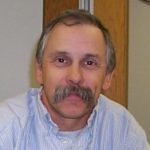 Ron is Director, Western Arctic Area for the Department of Fisheries and Oceans and is based in Yellowknife. A long time northerner, Ron Brings to the table a wealth of experience on resource management issues from all parts of the Canadian arctic. His term is temporary. 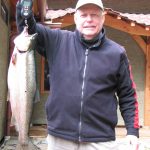 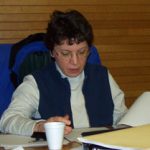 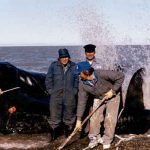 Billy Archie: Aklavik’s 1991 bowhead whale. Billy (crew member) is in the foreground, the late Titus Allen, harpooner is on the left and the late Danny A. Gordon, hunt captain, is on the rear right. 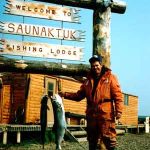 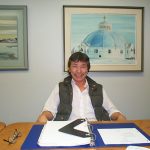 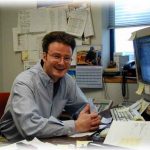 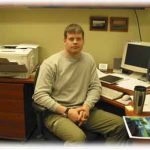 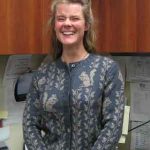 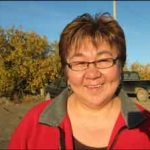 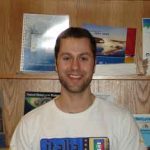 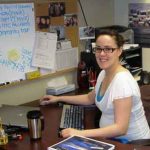 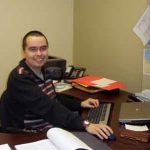